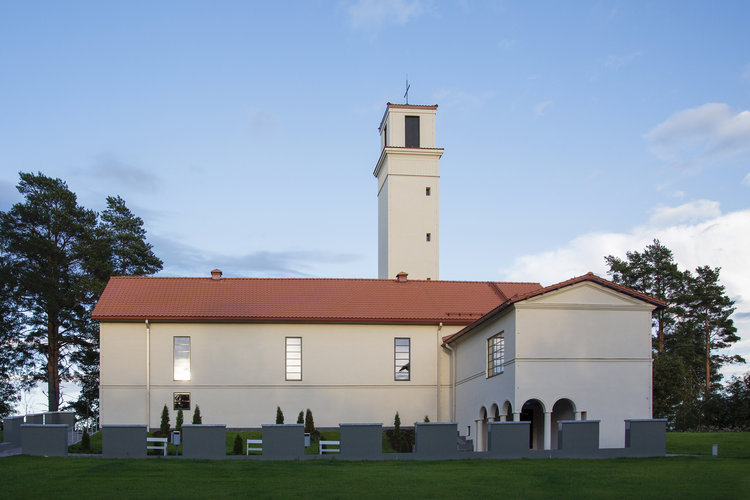 The church of Muurame was finished in 1929 based on Aalto’s design. The influence of Aalto’s honeymoon to Italy is visible in the details of the church: the Campanile-styled bell tower, the small windows located high off the ground, the marguee of the wing building, the coloring of the church and the wall surrounding the church. Architectually, the church embodies Nordic classicism.

Planning commission of the Muurame church included the design of the building’s main interior’s fixed and loose furnishings. Aino and Alvar Aalto designed all the church’s interior furnishing themselves. Design of the furniture mainly follows the expressionless idiom of the 1920’s classicism

The church underwent a restoration project in 2016. The interior and exterior restorations were executed according to architect studio Ark Kantonen’s plans. The premise of the restoration project was to restore the building to itse original and intended form: the original color was restored, the altar railing was rebuilt in its right-angled form and the wall of the rose garden was rebuilt. A brass chandelier-like electric lamp was added to the altar window, according to Aalto’s original 1929 design.

The restration spared the pew seats, ceiling lamps of the main church hall and the class door that separates the side hall of the church, which are remnants from the 1979 repairs. The stairway leading to the lower floor of the side hall has been relocated to the oppostie corner from its original location.

The 15-stop organ of the church was purchased in 1944 from the Kangasala organ factory.

The Muurame church altar fresco ”St Peter Healing the Sick with His Shadow ” was painted by the artist William Lönnberg in 1929. The parish originally ordered a painting on the Sermon on the Mount, but Lönnberg merely alluded to the motif – the mountain range is clearly visible in the background of the painting. The altarpiece is based on Acts 3: 1-10. It portrays the visit of Jesus’ disciples Peter and John to a temple in Jerusalem after the first Pentecost.

A cripple saw John and Peter passing by, and asked them for alms. The man expected to receive something from them.  Instead, Peter said ”Silver or gold I do not have, but what I do have I give you. In the name of Jesus Christ of Nazareth, walk”. Peter helped the man up, and the he regained strength in his legs. The man jumped up and walked with Peter and John to the temple. While walking, he praised God.

If Alvar Aalto was influenced by his visit to Italy, so was William Lönnberg. Italian influence is visible in the altarpiece’s rural and small town vistas. The round-arched corridor, which plays a central part in the painting, is repeated on the exterior of the Muurame church.

The church of Muurame was finished in 1929 based on Alvar Aalto’s design. It was renovated to its original outlook during 2015-2016.

The color scheme of the altar painting continues in the church hall, which is an extension of the painting’s setting, a place where today’s cripples are healed.